Abdullah Kadwani and Asad Qureshi of 7th Sky Entertainment are ruling the entertainment fraternity of Pakistan with terrific content catering to both momentary and mass audiences. Ranging from empowering narratives, romcoms, comic capers, social issues, breaking stereotypes to calling out patriarchy; they have left no stone unturned to entertain the audience. The dynamic duo is all set to launch their most heartwarming serial ‘Khuda Aur Mohabbat 3’. 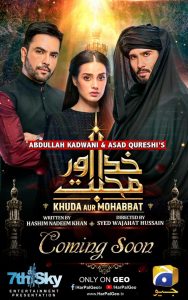 The basic premise of ‘Khuda Aur Mohabbat 3’ revolves around Hammad (Feroze Khan) a young boy from a lower-middle-class background falling in love with Mahi (Iqra Aziz). They meet, love blossoms, and part ways due to the huge class and cultural difference. ‘Khuda Aur Mohabbat 3’ also features another powerhouse performer Junaid Khan as the parallel lead.

Junaid Khan has built his career brick by brick by accepting daring subjects. Just recall his body of work ‘Silsilay, Kamzarf, Yaariyan, Mohabbat Na Kariyo, Kashf and Mohabbatein Chahatein’ the diversity in his portfolio has cemented his position as of the finest actors of the country. Junaid is an actor with a unique combination of critic and mass appeal; he is a volcano of talent leaving the viewers completely mesmerized with noteworthy performances one after the other. He has always added fresh shades and dimensions to stand out on screen in whatever character he portrays. His presence in ‘Khuda Aur Mohabbat 3’ will surely be vital.

An official statement by the production house said: “We are glad that Junaid Khan agreed to be a part of ‘Khuda Aur Mohabbat 3’. Khan is an actor who gives so much to his craft that we couldn’t think of considering any other options. The role required a certain kind of maturity and his act will enthrall the viewers like never before. His presence in the magnum opus project will add great value.”

The official trailer has been released on official YouTube channel.