Dolly Darling concludes as hilariously as it began! 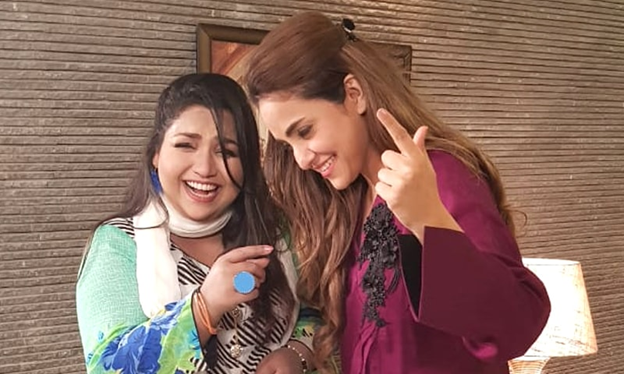 The sitcom series with four veteran cast members, starring Nadia Khan as Dolly, Aijaz Aslam as Mustakeem, Uroosa Siddiqui as Bemisaal and Ali Rizvi as Andesha took their characters to new heights through their phenomenal acting caliber. Dolly Darling ends with one year of smiles, 68 episodes of laughter and a whole lot of memories.

Last episode of Dolly Darling was another great episode in the sitcom series where Dolly and Bemisaal wanted to become models and their crazy innocent minds were trying every way possible to make their modelling dreams come true.

The episode started with both the ladies faking to be food inspectors raiding on a company. They offer the company owner to make an advertisement for their product starring them in order to get away with low quality food. This would have gone through smoothly but the real food inspectors come in and they run away from the place just in time.

Lucky for them Bemisaal learns from Andesha that a shampoo company is looking for models with long hair. Desperate to make their dream of modelling dreams a reality, Dolly and Bemisaal put on a fake wig and try for the audition.

Any other person would have used a rational hair wig, but Dolly being Dolly and Bemisaal being Bemisaal put a 6 foot long wig that trails behind them as they walk. Their hair catches the senior director’s eyes and he calls them with their husband to sign the contract. As Mustaqeem doesn’t give Dolly permission for modelling, it makes them go one step further where Bemisaal disguises as Dolly’s husband.