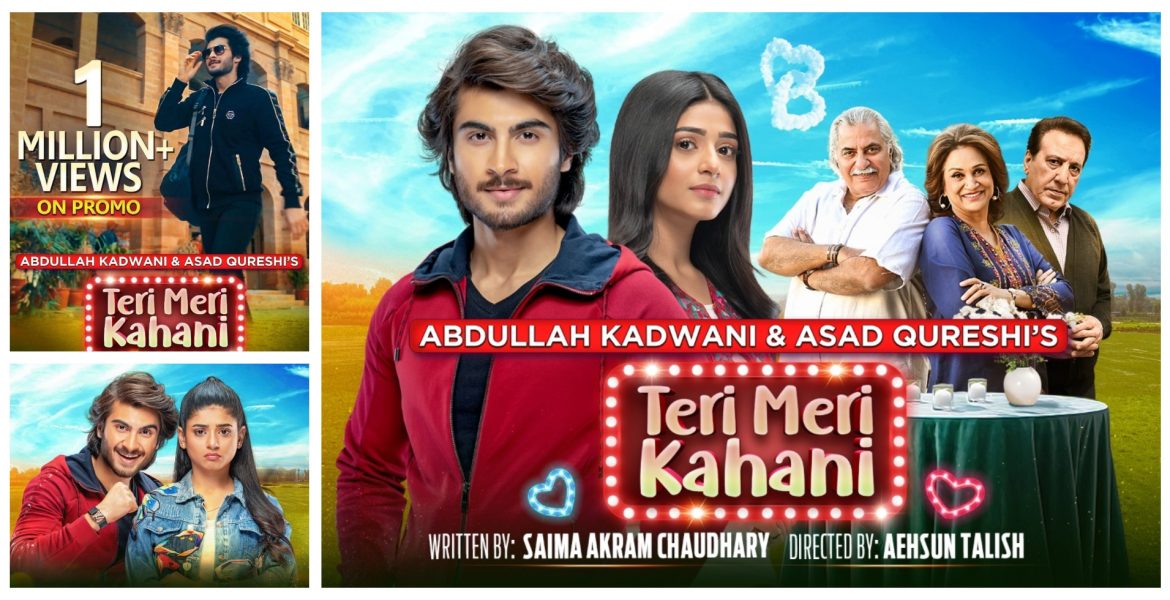 The momentous rise of television in Pakistan continues on its upwards climb where with each passing month, we see a plethora of new content making it way to the airwaves in great stride and garnering massive popularity. However, amidst all those dramas and serials who manage to crack the code and make it big, there are some that go on to become even bigger. One such latest example is the supremely popular telefilm everyone’s talking about for all the right reasons, Teri Meri Kahani.

Helmed by the dynamic producer duo of Abdullah Kadwani and Asad Qureshi, who have proven to be the modern-day scions of the industry with 7th Sky Entertainment, Teri Meri Kahani has gone on to prove why the audiences cannot stop loving this brilliant content which has released with so many gargantuan firsts.

What all does this project do due to which the audiences cannot stop talking about the telefilm? Diva has the lowdown…

Debuting in their first major acting roles, Teri Meri Kahani introduces Seher Khan and the latest rising star of the industry, Haroon Kadwani to the audiences in all their stride. However, in no way do the sizzling pair look like they are new actors. There’s great comfortability in their presence, and especially in Haroon’s case, he goes on to act next to the industry’s legends like Bushra Ansari and Javed Sheikh with utmost ease and naturality. There’s definite proof in this telefilm that we may have found ourselves a bona fide star of the future.

Telefilms are usually considered to not have a great production value, but much like all of 7th Sky Entertainment’s brilliant content, Teri Meri Kahani is a treasure trove of dynamism. There’s attention to detail and intricacies found throughout the telefilm, and each factor from production design and locations to cinematography have been taken care of the level of pure perfection. Rarely has anyone managed to up the ante the way this project has managed to. 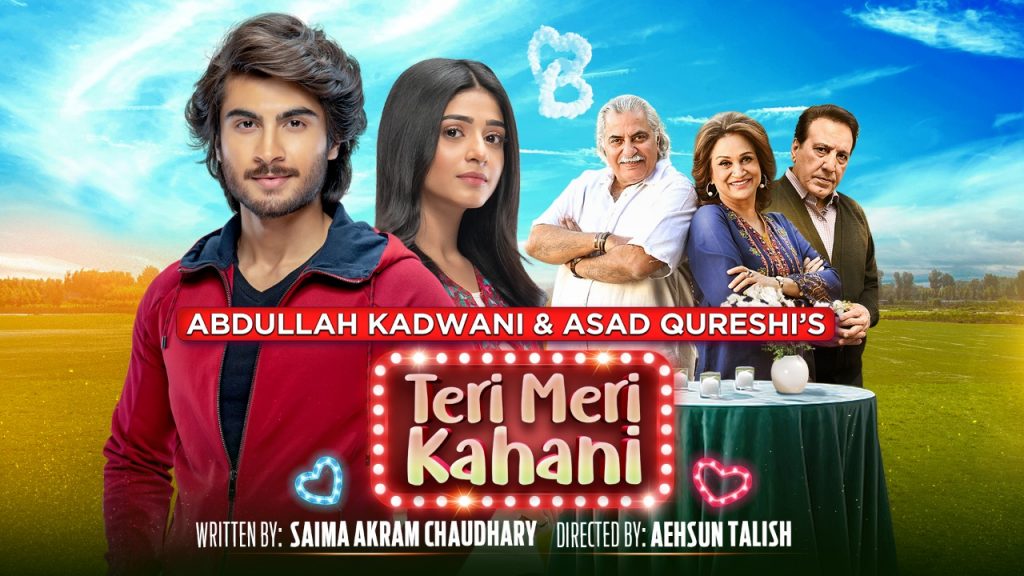 Teri Meri Kahani has brought together the cerebral talent of Abdullah Kadwani, Asad Qureshi and Aehsun Talish into one place, and that is definitely one of the major reasons why the telefilm has been able to shine through in such a grand way. The direction value that Aehsun has been able to add to the project is visible in the way each actor is able to perform to the best of their abilities, and to this date, it may be considered one of the strongest works produced by the director. 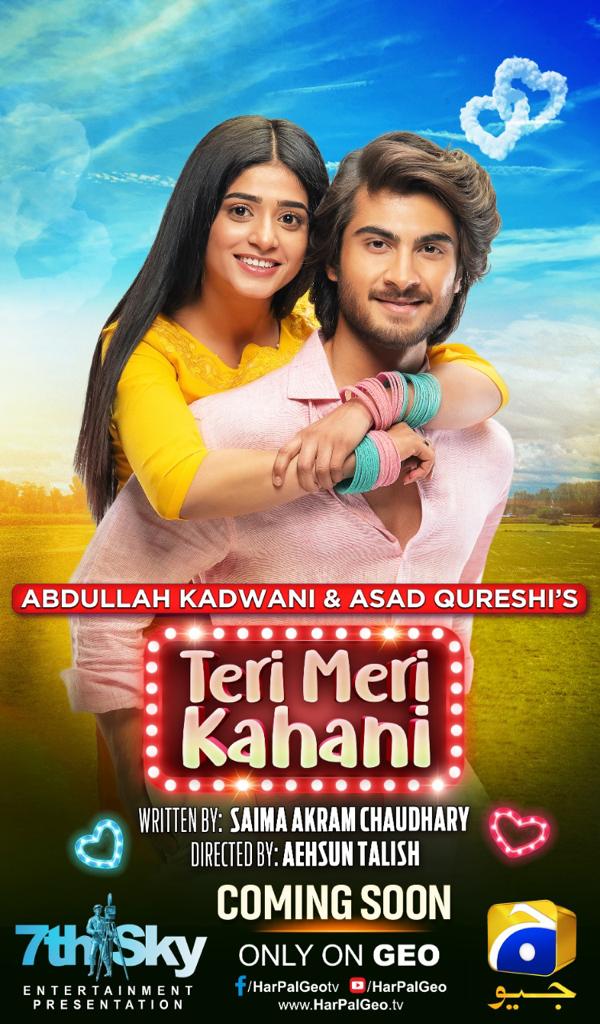 For any television content that wants to reach great heights, the script becomes the piece which is of utmost importance. Here too, the love-hate story penned by Saima Akram Chauhdry shines through like never before. There are beautiful moments of chemistry between Haroon Kadwani and Seher Khan showcased perfectly through the writing, and in each dramatic turn found in Teri Meri Kahani we find a breath of fresh air. 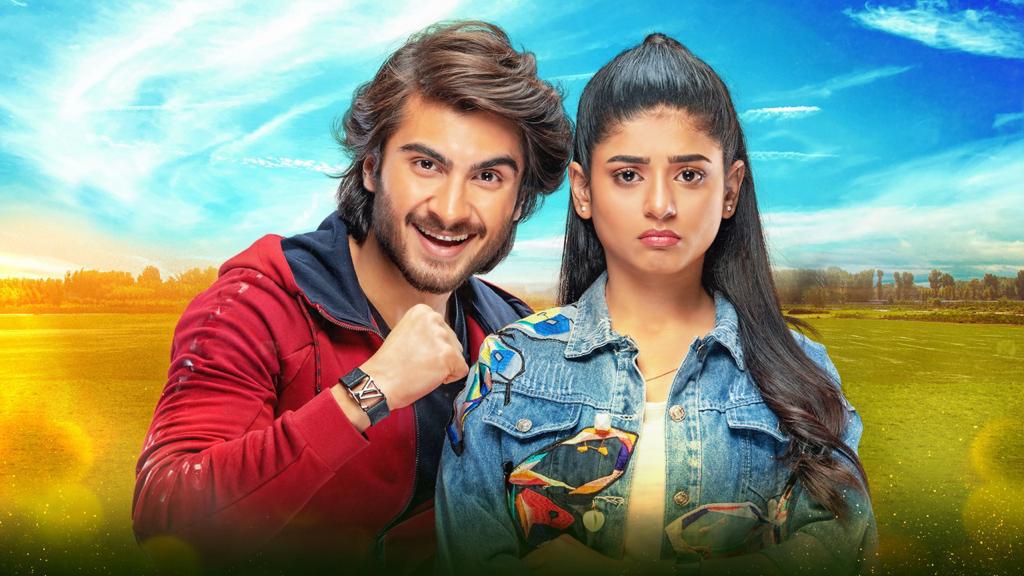 Gone are the days of pandering to just the same line of actors in all projects that become popular. Audiences cannot get enough of the budding youth being introduced in the industry, and Teri Meri Kahani is a brilliant example of this. Haroon Kadwani has been touted already by the audiences as the new-age superstar and each of his antics in the telefilm are being compared to the already established actors in the industry. In the most beautifully-crafted way, we see a massive rise of youth in this telefilm, and we can bet it has proven to be the perfect platform towards supreme success.

The Brilliance in Music

Telefilms rarely feature more than one OST, but not Teri Meri Kahani. The telefilm introduces the audience to two major songs within its runtime, and both have managed to garner grand numbers everywhere. Both of the OSTs Parchai by Wajhi Farooki and Mera Khuda by Shani Arshand have gone on to prove why 7th Sky Entertainment adds so many layers of depth and detail within its music as well, as the songs tug at the heartstrings in a multitude of ways.

Abdullah Kadwani and Asad Qureshi in their long spanning careers within the industry have proven that they have a signature style that remains inimitable and a purveyor of success. In Teri Meri Kahani too, it remains ever-present. We see content that is not just of high-quality, but also has moments of sheer entertainment, which the dynamic duo are known for. In many ways this is a mélange of all things we look up to the pair for!

The Looks To Die For 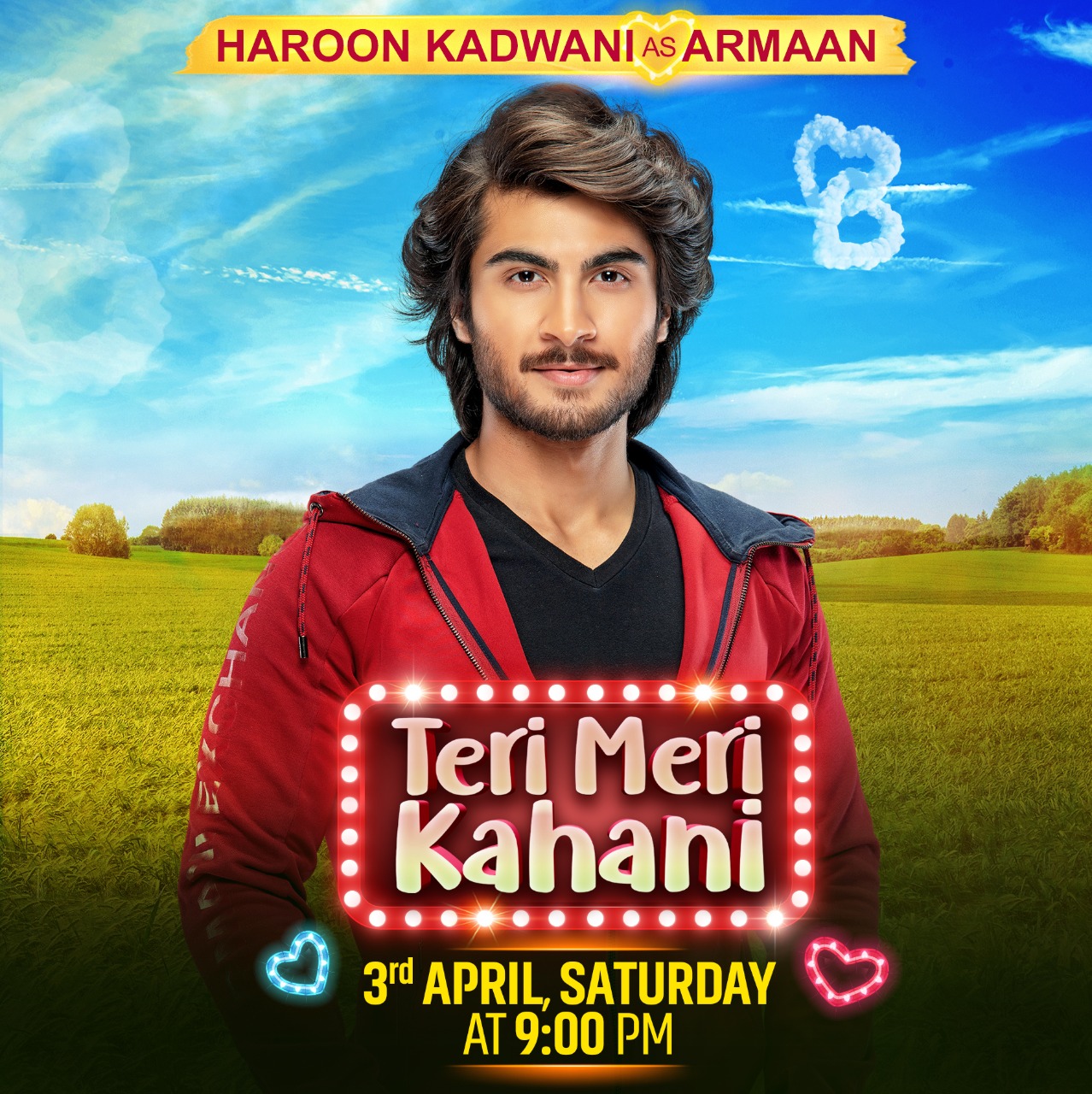 We’ve said it before and we will say it again, not only has Teri Meri Kahani introduced talented actors, but it has also given us some gorgeous faces to love. Haroon Kadwani and Seher Khan definitely add to the oomph factor of the industry, and we bet the latter will be someone the audiences will not stop talking about for his chiseled looks and brooding personality. 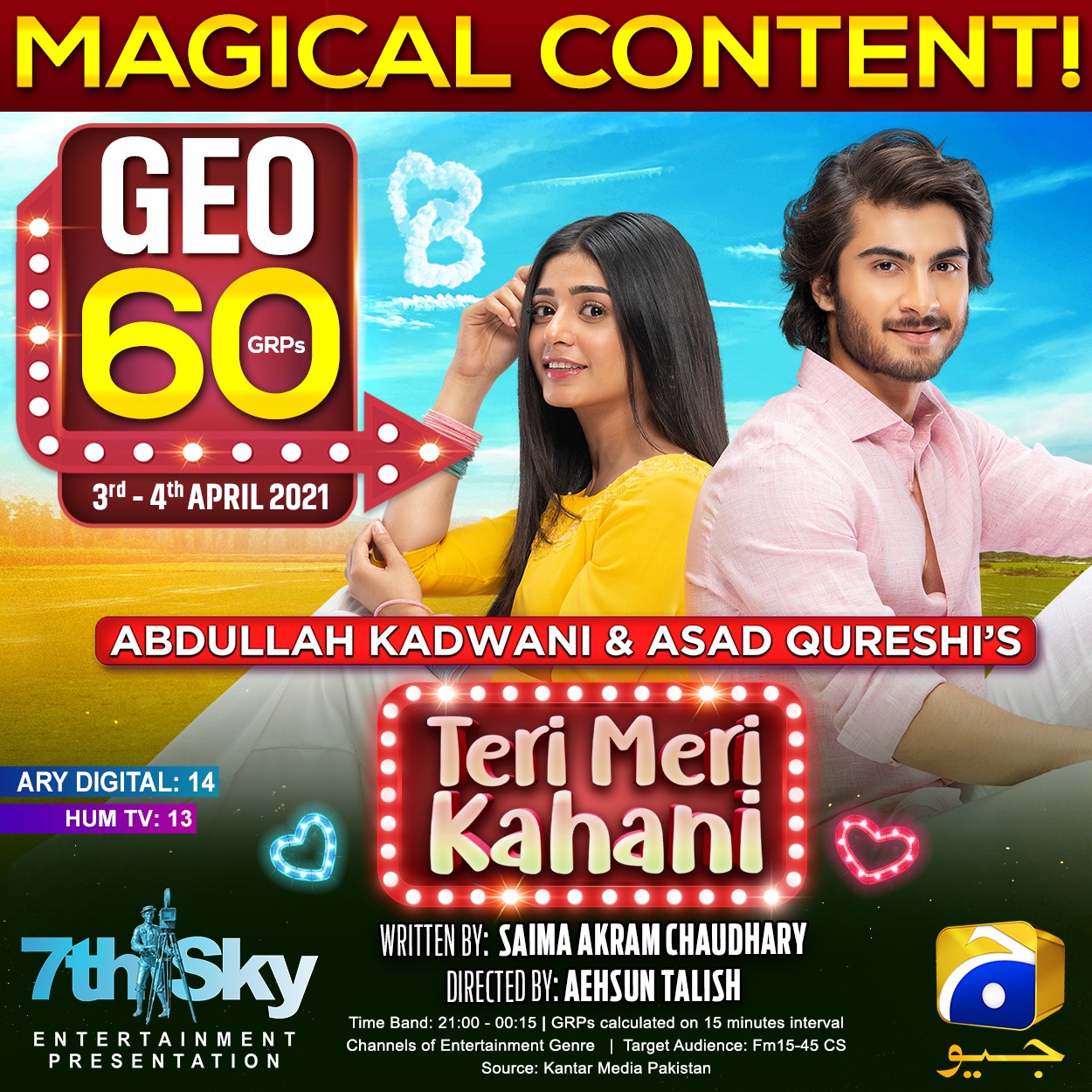 Much like any project that 7th Sky Entertainment brings out, Teri Meri Kahani has broken massive GRP numbers as well. Where the competing television channels couldn’t go above 16, the telefilm alone gave GEO a rating of 60 with its airing! Proving to be yet another success story for Abdullah Kadwani and Asad Qureshi, the telefilm sets the record straight that this production house knows how to get the numbers!

Teri Meri Kahani is not only a great piece of production to enjoy, but along with it, it also proves to be a project in which we see a legacy continuing. It brings Haroon Kadwani to the limelight, who in many ways is a reflection of his father, Abdullah Kadwani, especially when it comes to the acting skills. We see a lot of the same intricacies in the son that the father brought to the table with his talent, and that in itself, speaks volumes of a lasting legacy.